Scroll down for Association information

Ballina formed as a branch of the New South Wales Division in 1988. The branch meets monthly on the second Thursday at 11:00am, in the Cherry Street Sports and Recreation Club. Members lunch after the meeting in the Club's Restaurant. Other activities include social lunches on the last Thursday of each month, sometimes with a bus trip. Organised raffles supporting their charitable status; the branch supports the 326 (City of Lismore) Squadron Australian Air Force Cadets Scholarship Scheme, annual donations also give support to the Cadet Squadron, the Evans Head Historical Aviation Museum, Legacy, The Salvation Army, the Westpac Rescue Helicopter Service and Kokoda Village residents at Ballina RSL Life Care.

The Northern Rivers Naval and Mariners Association (NRNMA) has membership levels for Serving and Ex-serving Naval sailors plus Merchant Navy seamen of all ranks, as well as their partners and families.

Being primarily a social club, we have regular outings such as lunches, bowls days, afternoon presentations and similar, to provide camaraderie and fun for our members and guests. We also do regular Friday afternoon drinks at 1430 at the Ballina Anglers Club, which serves as a great dit-spinning venue, and also provides unofficial group discussion on health issues and a general RUOK roll call, while we sip beers or wines.

We are a happy mob who do not stand on ceremony. We have no head office, but do have a set of rules, of course. Low annual fees and a laid-back attitude has seen our association grow and serve extremely well.

History: Ballina Ex-Army personnel would gather once a month for an informal chat & a cup of coffee at the Ballina RSL Club, overlooking the beautiful & picturesque Richmond River.  Attendance numbers slowly swelled after word got around on the ‘grapevine’ of our existence.  After a few of these informal monthly coffee gatherings, on Friday 25th June 2010 it was agreed by those people present, that we should formalise this group with a name & investigate the procedures to becoming an incorporated association. So this became our foundation meeting. We duly incorporated with the NSW Office of Fair Trading & registered with the Department of Veterans’ Affairs as an official Ex-Service Organisation.

Ex-Service Pensions Advocacy was well established in the local area with the RSL & other Ex-Service Organisations so we directed these enquiries to those established organisations which made us principally a social organisation, we do however pursue member’s welfare concerns. We participate in the local Commemoration Services & community charity fundraising activities, representing the Army Service.  Our monthly social activities include bus trips to shows, theatre attendances & dinners. Our monthly meetings are held at 11 am on the last Friday of each month at the Ballina RSL Club.

Social Members & their partners (No Ex-Service) may also join at the discretion of the Association Executive. Under our Constitution, Social Members may not hold an executive position within the Association & have no voting rights. They may however attend meetings as an observer where they can obtain hardcopy handout information about our upcoming activities. Residential area is not an issue in joining the Association.

In September 1986, a group of local WW11, ex-service women met to form an Association, which became known as the Ballina and District Ex-Service Women’s association. They came from the Navy, Army and Air Force women’s service groups, holding monthly meetings with an attendance of 80-100 members, where new and old friendships developed a social bond.

During WW11 a shortage of male recruits was the reason to form Female branches of the armed services. The Women’s Auxiliary Australian Air Force (WAAAF) was the first to form in March1941 followed by the Australian Women’s Army Service (AWAS) in Oct.1941 and the Women’s Royal Australian Navy (WRANS) in July 1942.

In 1944, almost 50,000 women were serving and thousand more joined the Civilian Australian Land Army.  Many were trained to do skilled work in male occupations, to free men up for operational service.  At the end of the war these branches were disbanded.

During the Korean War similar issues arose, whereby it became necessary to permanently establish the Women’s Services in 1951.

Our Christmas lunch is held on the 2nd Monday in December at the RSL Club in Grant Street.

Ex-Service Women from Grafton, Pottsville and Byron Bay are invited for that lunch. All functions start at 11-45am.

Annually we join with the Ballina RSL sub-Branch, Navy, KSEAVVA, Army and Air Force Associations, to conduct a Charity Bowls day in March each year.  One organisation from this group coordinates and selects the Charity to benefit from the day.  It raises anything from $3,500 to $4,500 (Weather a factor). The Ex-service Women Association are up for March 2020.

We March on Anzac Day behind our own banner, which always gets a good cheer of “Go Girls.”

We encourage all ex-service women to join, currently our youngest in her 50’s to the eldest at 99.

We have working women, with some working our lunch around their own lunch break. June lunch is always held on the long week-end (Queens Birthday), makeing it a little easier for them.

We are not a large group, but we are a friendly and sociable group.  Give us a go.

The Association fundraises to support local charities, organisation and the Ballina and Districts Community.

KSEAVVA loves to welcome new Members.   They meet on the second Tuesday of the month.  Memberships are open to Veterans and Non-Veterans, if you would like to help the Association continue the KSEAVVA legacy please get in touch.

Founded by two Afghanistan Veterans in 2016 with the vision of connecting the Veteran Community through Surfing and Mateship. AVS is now registered through ACNC and is recognised as a board rider club within their respective community. What started as a simple idea to catch up with mates after separating from the defence force has turned into a large community-based group that is bridging the gap for Veterans and their families from social isolation and the mental health issues that Veterans face during and after their service.

At present we have chapters in Sydney, Hunter/Central Coast, North Coast, Sunshine Coast and Gold Coast. This event will be received by a wide audience and AVS looks forward to highlighting not only the great work that is being done but also promoting the direction for AVS moving forward in hope that we can continue to support veterans and their families within their community.

What do we do? There are significant benefits to the practice of Ocean Therapy. There is a simple term known as “FLOW” where a person becomes fully and completely involved in an activity to the exclusion of everything else. Their minds are emptied from the traumatic memories that continually cycle through them. They become immersed in the activity, much like a moving form of mindfulness meditation.

PTSD is a debilitating psychological condition that veterans can experience in the aftermath of combat, deployments and life after service. Hyper-vigilance, depression, anxiety is some of the symptoms that veterans face on a daily basis. Surfing and the mental state known as “FLOW” is a recipe for success with physical and mental benefits including improved sleep, improved mood, increased self-esteem, a sense of purpose and a positive step to re-integrate
into society.

Through avenues such as Ocean Therapy we are providing some incredible support within our regions. To continue this work, we need support from the communities that have been the motivation for our men and women to serve the nations interests in the capacity we have.

We would love to talk more about where the benefits of your gratitude can be directed in addition to keeping you informed about the progress of AVS.
Ben Haime
President
AVS North Coast
M: 0448 909 043 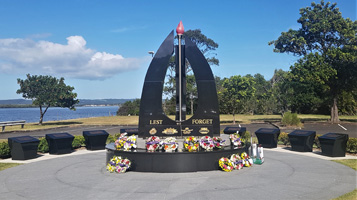